COMIC BOOKS ARE FOR IDIOTS: THE SINESTRO CORPS WAR 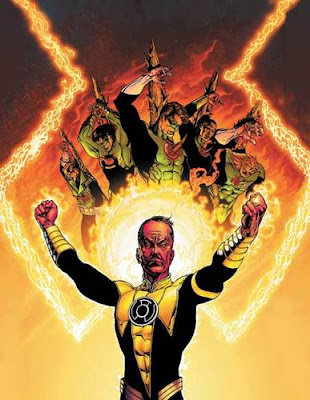 Running for the past six months in the pages of GREEN LANTERN and GREEN LANTERN CORPS, the epic crossover "The Sinestro Corp War" has just concluded, and I have to say that I'm rather pleased with the results.

Super-villain Sinestro — one of the legion of Silver Age DCU villains whose names ends with an "O" — has been kicking around since 1961 and has earned the distinction of being perhaps Hal (primary Green Lantern of Earth) Jordan's arch-enemy, having once been considered the greatest Green Lantern ever to wield a power ring, until he was supplanted by his own trainee, a newbie Hal Jordan. Unfortunately for the citizens of his homeworld, Korugar, Sinestro's policing of the planet was very much of the "my way or the highway" stripe, and he eventually grew to become a merciless dictator who demanded outright, blind worship and loyalty from his people, thereby ensuring his ousting by the Guardians of the Universe (those balding, blue refugees from the Lollipop Guild who formed the Green Lantern Corps in the first place and wield great cosmic power). Once stripped of his duites and power ring and banished to the anti-matter universe of Qward, an embittered Sinestro got his hands on a yellow power ring — this was back in the days when the Green Lantern power rings had that idiot weakness when pitted against the color yellow — and embarked on a career as an intergalactic black hat.

I've read many stories that featured Sinestro over the years and have never felt he lived up to his position in the roster of top tier DCU baddies, coming off as a priggish martinet and occasionally looking a bit like John Waters (despite being modeled after David Niven), and not being intimidating in any way; admittedly, I have not read all of the stories to feature him and missed the one where he wiped out whole star systems, which is pretty badassed. He was scrawny, balding, resembled a bitchy hairdresser, and I swear to the gods that I can't think of a single story in which he struck me as a viable threat. Until now, that is. 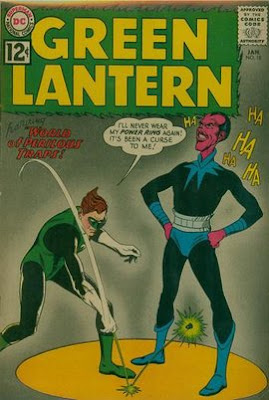 Vintage Sinestro, in dire need of a protein shake and a gym membership. (And what the hell's up with Hal Jordan's hairdo?)

Fed up of years of humiliating defeat at the hands of the Green Lanterns, Sinestro finally gets his evil shit together and literally becomes one with the essence of fear itself, then sets about recruiting the most vicious like-minded scum from across several galaxies to form the Sinestro Corps. 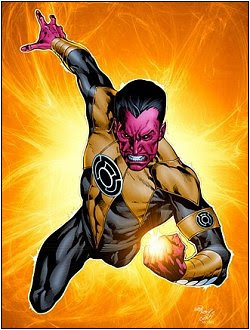 The current Sinestro, facist king of the bad news bling-bling.

What results ia a deadly intergalactic carnage-fest which gets so nasty that the Guardians of the Universe rewrite the rules and authorise the Green Lantern Corps' power rings to be used with lethal intent, basically making the Corps cops with fully-loaded magnums instead of just creative and tough crossing guards who make big, green boxing gloves with their willpower. As the war escalates there are heavy casualties on both sides and the heroes are put to the test of their lives, for once being featured in a cosmic epic that lives up to its promise.

I've had a great time reading GREEN LANTERN and GREEN LANTERN CORPS, and it's wondrous to see the scale of a GL story make use of the potential of a whole universe to play in, complete with innumerable alien races on the scene, as well as all of Earth's super-powered badasses showing up to help and looking a bit overwhelmed (to be fair, the home team acquits itself admirably, but the level of extraterrestrial power on display makes them pale a bit in comparison). Even the presence of the Anti-Monitor (yeah, him again), the evil Crisis-displaced Superboy, and that fucking Cyborg Superman actually works, each being used to maximum villainous effect, the Anti- Monitor even rivaling Godzilla for sheer giant monster awesomeness, and that's really saying something considering the guy looks like an ambulatory suet birdfeeder in armor and bondage gear.

But, fun though it was, the Sinestro Corps War does have three big flaws:

1. As is often the case with big crossover events, the majority of what goes on is steeped in decades of superhero soap opera backstory and much of the reader's enjoyment is predicated upon having a solid-or-better working knowledge of the continuity, thereby instantly excluding many potential audience members.

2. As is also often the case with big crossover events, DC saw fit to milk this bestselling cash cow for all it was worth and issued a couple of side-books and one-shots that add nothing to the story and are utterly disposable. I skimmed them, and they don't affect the main epic one bit, but readers not in the know (and completeists) may get sucked in, so caveat emptor.

3. At the end of the whole thing, just when I was ready to sit back and contemplate the best American comic book space epic since Jim Starlin's interconnected CAPTAIN MARVEL and WARLOCK sagas of the 1970's, I turned the page and was greeted with a two-page ad hyping the next big GL crossover arc, "The Blackest Night," due to hit the stands in the summer of 2008. That just hit me as reducing a way cool epic to just another assembly line product with a built-in sequel and attendant satellite books. After the overall awesomeness of the story it just felt to me like DC announcing something too far in advance, something that could have grown organically during the months leading up to it and resulting in a sensible culmination to where the series has been heading since the first issue of the revived GREEN LANTERN series. By way of example, think of what it would have been like if Marvel loudly announced that there was going to be a "Dark Phoenix Saga" a year before it happened; that would have blown a lengthy and rewarding setup and come off as a blatant example of the company's hype-machine setting up expectations that just might not be met with anything worth shelling out the cash to read. Just look at how well 52 and COUNTDOWN turned out...

And as for the endless crossover epics that have become ubiquitous since CRISIS ON INFINITE EARTHS (1985), enough with the shit already! It seems like there's a new "universe-shattering event" every couple of months, most of which suck ass, and, to paraphrase Syndrome, when everything's special, nothing is. So knock it off, for fuck's sake!

Anyway, pick this series up when it's collected (which, knowing DC, will probably be in a couple of weeks), put on "Planet Rock," smoke a few bonghits, and revel in a kickass space opera. RECOMMENDED.
Posted by Bunche (pop culture ronin) at Monday, December 17, 2007

Crossgen's "Negation" was the best cosmic epic of recent years. It's a shame not many people have read it.

I gave up on this story early on after I accidentally bought the same issue twice because it had a fucking alternate cover.

Granted, I wasn't paying attention when I bought it, but I've always hated that gimmick and this latest, greatest, cosmic crossover story arc wasn't strong enough to overcome my annoyance with DC over that.

I probably would've bought GL Corps again after this arc ended, as I always liked the characters, but now that you tell me there's another one coming up next year, I won't bother.