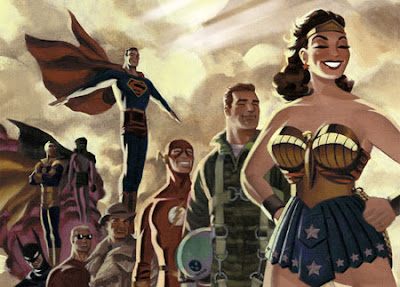 Darwyn Cooke's 2003-2004 masterpiece DC: THE NEW FRONTIER is getting the direct-to-DVD animated feature treatment, and I simply can't wait to see it. The comic was a six-issue tour de force of Silver Age geekery that not only nailed the huge cast of of characters' personalities, but also delivered one hundred percent on the artwork front, with artist/writer Darwyn Cooke making other artists just give it up and cut off their own hands, his love of the material as evident as the "S" on Superman's barrel chest. If you love the DC heroes of the Silver Age you owe it to yourself to read it, and once done you'll see why I'm so damned psyched for the movie version; it's being shepherded by Bruce Timm, the guy who gave us BATMAN: THE ANIMATED SERIES, the WB SUPERMAN cartoon, and JUSTICE LEAGUE (both regular and UNLIMITED), all of which were very, very good, and Cooke himself told me to my face that he couldn't be happier with the adaptation of his baby. When a creator actually has something positive to say about an adaptation of his work, that's some serious shit, my friend, especially in a medium virtually synonymous with fucking comic books (and their fans) right in the ass.

JUSTICE LEAGUE: THE NEW FRONTIER will be released on DVD on February 28th, 2008 in single edition and 2-disc collector's versions, and here are some stills from it to whet your appetite. Damn, I want to see this! 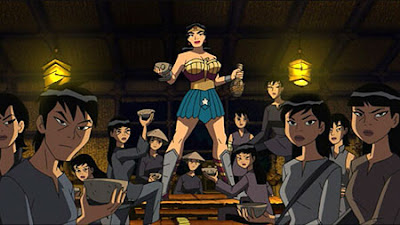 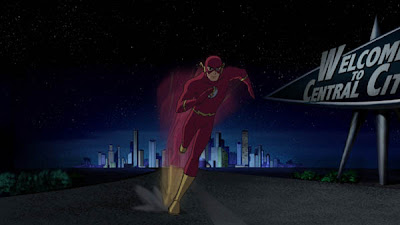 Neil Patrick Harris as the Flash! 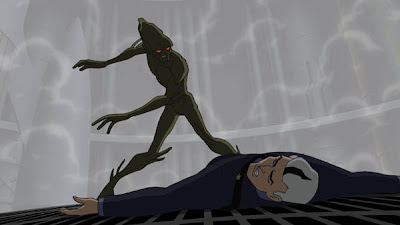 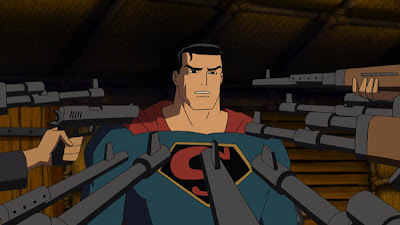 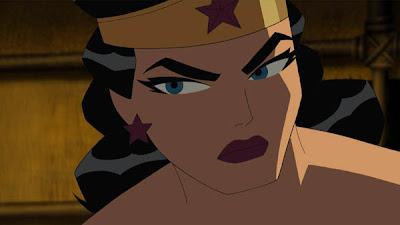 Wonder Woman, ready to kick your ass if you don't buy the DVD!!!
Posted by Bunche (pop culture ronin) at Monday, December 24, 2007