COMIC BOOKS ARE FOR IDIOTS: THE TWELVE #0 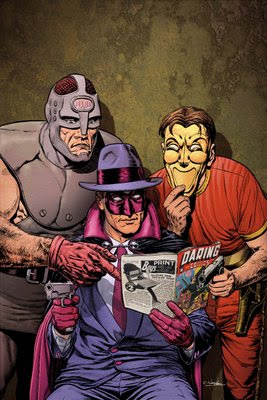 My pal Chris Weston has been working on THE TWELVE for Marvel Comics for quite some time, and as expected his artwork kicks ass all over the page.

The series is a look at the grade-Z heroes from Marvel's Golden Age, and Chris has risen to the occasion in his depiction of such non-luminaries as Rockman, the Blue Blade, Captain Wonder, the Phantom Reporter, and my favorite of the bunch thanks to his completely insane first appearance story from back in the days, the Fiery mask (trust me, next to Stardust the Super Wizard or Fantomah you will find no stranger comics story from the period). Chris's realistic style and clear storytelling skills serve the material greatly, and this issue zero preview presents his character design sketchbook as a followup to a trio of Golden Age reprints that put it all into perspective. Following that we're treated to two lettered color pages and four unlettered black and white pages that allow you to get an unfettered look at Chris's work, and I'm willing to bet you'll be impressed.

If you're a fan of quality comics illustration, behind-the-scenes looks at the process of creating this stuff, and character design pages — to say nothing of obscure reprint material — this is a preview book that's in no way a ripoff (for once), and the series proper hits the stands with issue #1 on January 2nd. TRUST YER BUNCHE!!!
Posted by Bunche (pop culture ronin) at Thursday, December 06, 2007