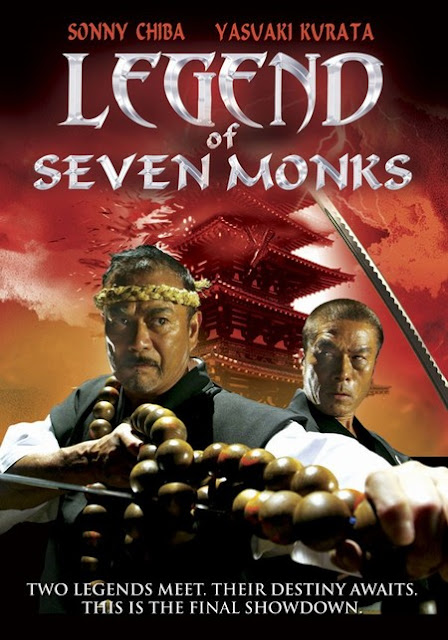 Originally entitled MASTER OF THUNDER in Japan (for reasons that remain obscure in the US release), this martial arts/sorcery flick is pretty minor stuff, though it is fun while it lasts. It tells the story of a demon who wants to enter and conquer our plane of existence and the secluded holy order whose task it is to periodically perform the "sealing" ritual that keeps him at bay in Jigoku (the Japanese version of good old Hell). The current crop of holy adepts get the living shit mercilessly kicked out of them in the deep woods by the demon's insanely skilled henchman at the beginning of the movie, leaving one young monk barely alive but in no shape to handle the sealing. All that's left to get the job done are the head monk, skilled but now in his sixties, and the cute girl who serves as the temple's cook and the monk's adopted de facto daughter, and the two of them couldn't possibly deal with the threat so the girl ventures out into the mundane world in search of enough replacement monks to kick ass on the enemy once and for all. She tracks down three young men and three young women, each with ties to the original band of monks who defeated the demon in 1970, the last time he tried to get loose, and in no time the disparate band of weirdoes and misfits are in training for a final showdown with cosmic evil. Also figuring into this is another ageing monk who was once partnered with the other old dude back in the days, but when the demon's previous attack left his sister a casualty of war he left the temple and become a recluse who carves religious figurines. The rest of the story builds to the final conflict and sees the former monk get off his ass and eventually win the day with an act of supreme sacrifice.

As this kind of stuff goes LEGEND OF SEVEN MONKS isn't bad, but it feels like a kid's movie with delusions of grandeur and would be forgotten immediately after viewing if not for the first onscreen pairing of chopsocky legends Sonny (THE STREET FIGHTER) Chiba and Yasuaki Kuarata. I have hardcore love for both of those guys, and they're the sole reason I picked up this flick without having previously heard of it. 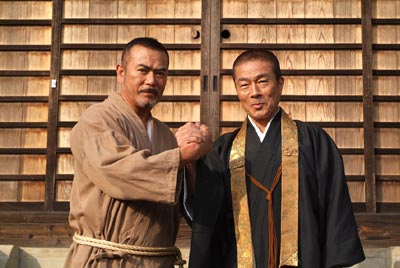 
Chiba's a well-known face to those of us who love ass-whuppin' and ultra-violent exploitation sleazery, but Kurata is mainly known in the west as the all-purpose Japanese heavy in several Hong Kong productions, having played memorable sympathetic antagonists in HEROES OF THE EAST (aka CHALLENGE OF THE NINJA, 1979) and FIST OF LEGEND (1994). He's one of the most expressive actors ever to grace the martial screen, and even when he's played straight-up bad guys he's virtually impossible not to like, and it's fun to see him and Chiba go at it, even at this stage in life (although the crazy acrobatics found in their earlier, more intense works is simply out of the question for guys in their sixties).

So LEGEND OF SEVEN MONKS is worth seeing solely for the old fogeys, but Chiba fans should also be alerted to the fact that Sonny's mostly present for the last quarter of the film, his total screen time adding up to just about fifteen minutes. The rest of the flick belongs to Kurata and the antics of the monks-in-training. And peaking of the monks, they're kind of annoying in that way that only Japanese teen idols can be, simultaneously cute enough to spontaneously cause diabetes and display acting chops that are limited at best. The girls are cute and the two Japanese guys are a couple of zeroes, but the most irritating of the lot is an African guy whose performance is just a couple of notches shy of modern day minstrelsy. I'd have thought the Japanese were past this kind of portrayal of blacks, but seeing as we're seldom seen in Japanese cinema — I'm sure it's a question of there not being enough blacks in the country to make us societally ubiquitous yet, rather than a conscious ommission — I guess there hasn't really been much cause for change in this area since the 1970's heyday of karate flicks. TRUST YER BUNCHE!!!
Posted by Bunche (pop culture ronin) at Wednesday, December 19, 2007