RORSCHACH GOES TO THE MOVIES 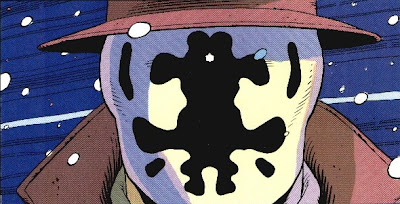 “(Existence) has no pattern save what we imagine after staring at it for too long."
-Walter “Rorscach” Kovacs

Okay. I have dreaded the big screen adaptation of the landmark graphic novel WATCHMEN since the day it was first suggested that someone might attempt to film it. I have serious reservations for several reasons about how Alan Moore and Dave Gibbons' classic will translate to cinema, despite how cinematic the comic book source material was, but I'll see it anyway simply out of morbid curiosity. But now that morbid curiosity has become vested interest, now that I've heard about one bit of casting that I never in a million years would have considered. Rorschach, the psychotic and ultra-violent vigilante investigator with the disturbing visage, will be essayed by Jackie Earle Haley, perhaps best known for his portrayal of Kelly Leak, the motorcycle-riding juvenile delinquent batting ace in the original THE BAD NEWS BEARS (1976), who so memorably described his soon-to-be-teammates' baseball playing as not fit for anybody but “faggots and old farts with nothing better to do with themselves.” 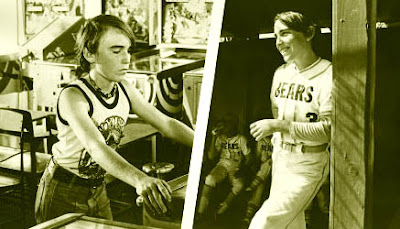 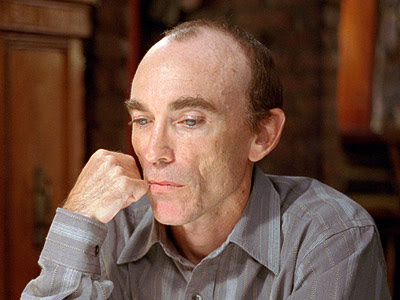 Haley appeared in the two wretched BEARS sequels and after those he was pretty much relegated to the blink-and-you'll-miss-it flicks, save for an hilarious guest turn on the late, lamented Fox sitcom GET A LIFE, but nowadays he’s making a comeback. His gaunt, haunted look is perfect for Rorscach’s unmasked true identity, Walter Kovacs, and he certainly has the acting chops to make the part work. I only hope the rest of the film lives up to this one bright ray of hope… 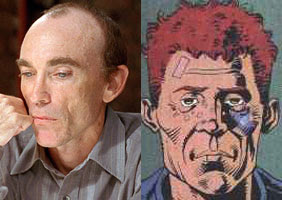 For more on this, check out the WATCHMEN movie blog .
Posted by Bunche (pop culture ronin) at Monday, December 17, 2007

I was never that big a "Watchman" fan. I think the pirate part ruined it for me.

Billy Crudup is Dr. Manhattan, and I'll see anything that Billy Crudup's in.

I have a lot of opinions about how they should handle it, but I think it's in gifted and earnest hands. It's not going to be Batman 1966.

Don't know what they'll do about Dr. Manhattan's willy playing a prominent part. In the comic you rarely think about it, in the movie it might be quite an issue...

I think the trouble with Watchmen the movie is going to be giving the film the narrative depth that the comic book contains. The "A" narrative is simple enough, but it's all those flashbacks that give the book it's real soul. So we'll see. They have a lot more lead time on the film than most shooting schedules I've seen, and I can't imagine they have a lot in the way of CGI. I'm sure Dr. Manhattan will be glowing, I just hope they keep it subdued.

I expect that either NY Con or San Diego will have a trailer - and even *then* the movie crew has the luxury of tinkering with the final cut until March '09.

It's that piece of casting that's got me all a-twitter as well. :)

So far, I like all the buzz I'm hearing about Watchmen. I doubt it could be as good as the comic, but it could still be a helluva movie. Like Jared, I too hated the pirate segments. They were pointless and took away from the main story.

Either way, I would assume the pirate mini-story will get the Tom Bombadil treatment for the movie.

I am sooooo with you guys on that "Black Freighter" mess. It made no sense to me, especially within the context of the overall story, it came off as pretentious, and it brought the narrative to a grinding halt.