The latest holiday cards have arrived! First up is the work of indy comics gadabout and fellow Brooklyn resident Dean Haspiel , a guy I've known forever and who turned in some memorable work a few years back in the first (and excellent) volume of DC's BIZARRO COMICS. I met Dean when I was an R.A. in college at SUNY at Purchase back in the fall of 1986, and he had the comics fever even back then. Also Dean was famed on campus for an amusing incident involving drunkenness, the roof of the library and two broken legs, but seeing as that's his story I'll leave it for him to translate into a graphic novel. 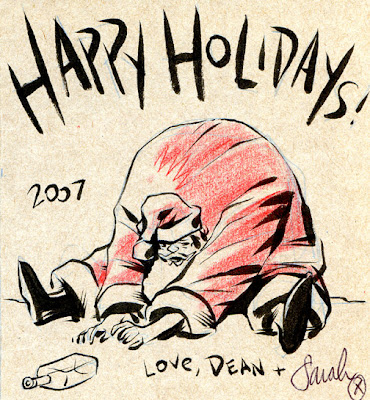 This one's from Jason Brown, a crazed loon with his finger in several artistic pies and one of several creative types I really need to get off my ass and make more time for in the coming year. He's a very cool guy and I've unintentionally and unfairly neglected him for far too long. And is it just me, or does he bear a strong resemblance to Popeye in this pic? 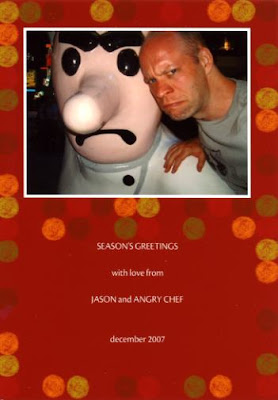