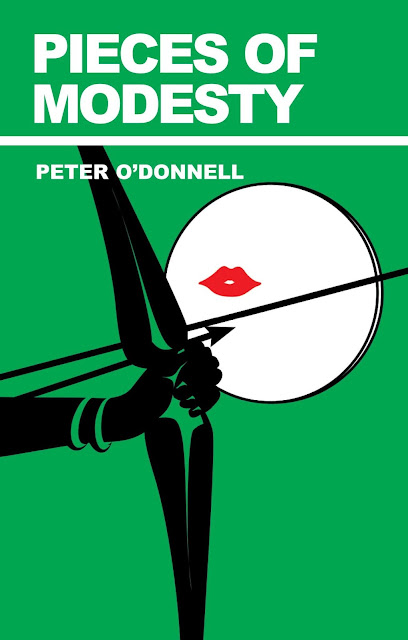 According to the Wikipedia, this collection of short stories was originally intended to be issued as an edition featuring illustrations by original MODESTY BLAISE cartoonist Jim Holdaway, but Holdaway died in 1970 and the stories lay fallow until finally published in 1972. Holdaway did, however, provide the art before his untimely demise, and the illustrations have seen print in various magazines (I, alas, don't have any of them). Also, elements from some of these stories later found their way into the daily comic strip, a fact that doesn't surprise me since much of this material reads like something much more out of a comic than what's usually found in the fully fleshed-out novels. And those stories are:

"A Better Day to Die"-Modesty has a clash of ideologies with a fanatically pacifistic priest, a man who soon comes to see that while violence may not be "right" per se, it is occasionally necessary. Features a gang rape of a Catholic schoolgirl by a quartet of alleged revolutionaries that, while occurring more or less offscreen, is not only distasteful but also sees the young victim contemplating how her violation has moved her into womanhood and "increased her cachet." All of this happens while Modesty's about fifty feet away, but seeing that she's surrounded by armed villains there's nothing she can do without getting herself or the rest of a busload of schoolgirls shot or worse, so she, the priest, and the other girls have to listen to the poor victim's terrified and anguished screams, which only adds to the awfulness of it.

"The Giggle-Wrecker"-A very slight tale in which Modesty and Willie must get a defecting and arrogant germ warfare specialist out of East Berlin, distinguished by a truly ingenious and hilariously silly solution to their problem, and a fairly decent twist thrown in at the end for good measure.

"I Had a Date with Lady Janet"-unique in the annals of Modesty Blaise, this is the only story O'Donnell ever wrote from Willie Garvin's point of view. It's a pretty standard first person recounting of Willie canceling a hot date so he can rescue Modesty from a revenge-bent bad guy and his murderous henchmen, made interesting only by the fact that it all comes straight from Willie's mouth in his familiar turn of phrase.

"A Perfect Night to Break Your Neck"-Always a welcome addition to any Modesty Blaise story, this one sees the return of Steve and Dinah Collier and their involvement in assisting the thwarting a bunch of modern-day pirates who prey upon wealthy yacht-partiers. Cowardly Stephen's strategy for bluffing a knife-wielding professional killer is a classic bit of business that's worth the price of admission, especially if you're already familiar with the character.

"Salamander Four"-Proof that Modesty can't help but be a magnet for trouble, even when posing nude for a sculptor in Finland. And, hoo-boy, does our girl do her part to help the artist past a bit of creative block...

"The Soo Girl Charity"-What starts out as a humorous revenge heist — an obnoxious financier plays a game of grab-ass with Modesty while she's on the street collecting money for a mental health charity and leaves a livid bruise on her butt cheek, so the gauntlet is thrown — turns deadly serious when Modesty and Willie infiltrate their enemy's home and discover that he's a seriously kinky sadist who's been putting his bought-for-a-hundred-dollars and ultra-submissive Asian child bride through a mutilating and hellish existence.

Definitely a very mixed bag, PIECES OF MODESTY is worth a look for Blaise fans and is certainly better than the later short story collection, COBRA TRAP (1996), but overall the book feels like six story arcs from the newspaper strip that have been shorn of the accompanying artwork. If you want my honest opinion, the second half of the book is the best of it, especially "A Perfect Night To Break Your Neck" and "Salamander Four," and though not bad "I Had A Date With Lady Janet" is a major disappointment to us Willie Garvin boosters, providing nothing that couldn't have been had in a story not narrated by our favorite Cockney badass. This is also the only book in the series not to be included among the recent reprints, so it's a bit of a collector's item and as such is hard to find and not exactly cheap. Having paid thirty-five bucks for my hardcover edition, I have to say that it isn't worth much more than fifteen-to-twenty bucks max, even for die hard Blaise junkies, so caveat emptor.
Posted by Bunche (pop culture ronin) at Monday, December 10, 2007