ON THE SIDEWALKS OF NEW YORK: RANDOM WEIRDNESS

Here's a selection of shots I took during my wanderings of this city's boroughs. Nothing truly spectacular, but whaddaya want? They cant all be gems.

Brooklyn's Fulton Mall is a several-block expanse that caters to a largely Balck and Hispanic clientele, providing an array of stereotypical fashions, bling-bling, and unhealthy food, and every now and then while I'm there my eye will be caught by something truly odd, such as this almost-close-enough-to-be-copyright-infringed Spider-Man hoodie sweat jacket. 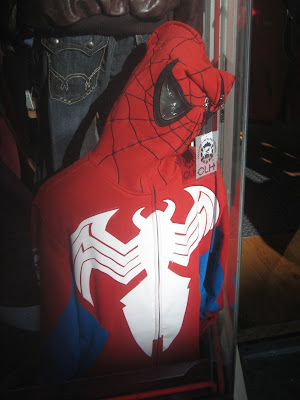 It's adult-sized, zips closed over your entire head, even providing the bug's eye goggle lenses, completely obscuring the wearer's features. Jimmy Palmiotti summed up my thoughts exactly when I showed it to him and he observed, "Future bank robber."

This notice is from the window of Non-Stop Discount, one of those stores where everything costs less than three bucks and every item of clothing is guaranteed to burst into flame or disintegrate the second you get it home. 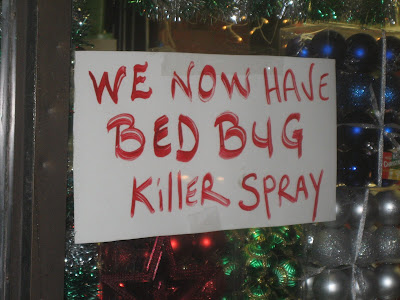 Apparently bed bugs are a big issue in the area, and considering where it is I can't say I'm surprised in the least.

I was just talking about this upcoming movie with my buddy Chris Gazelli last night, and we're both dying to see it, even though it's practically assured to suck out loud. At least the trailer was violent as a motherfucker, so it may be at least entertaining... 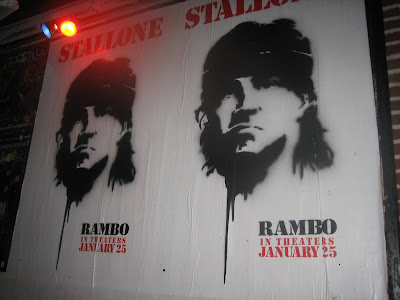 This ad heralds the coming of a film that presages the Apocalypse. 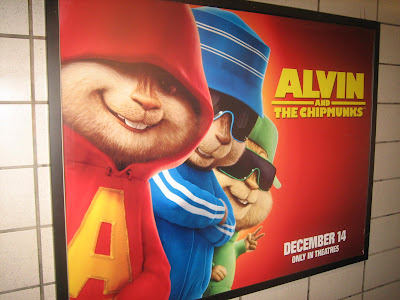 And while we're on the subject of hideous rodents, this restaurant in Queens proudly displays the availabilty of deliciously prepared Guinea pigs — yes, you read that right — hopefully served sans fur. 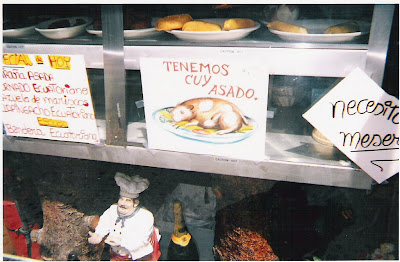 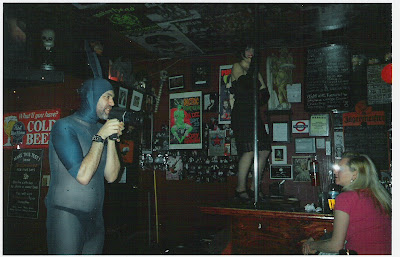 From that same night, here's a shot of the extremely bombed bartender blowing Gene Simmons-style fireballs, indoors, in a bar with a ceiling covered with brittle and old paper rock & roll posters. Needless to say, I was right near the door when I took this one. 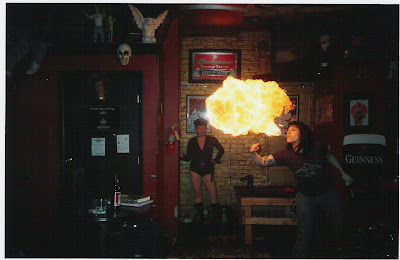 On another utterly bizarre evening I ran into Scotty the Blue Bunny again, this time out of uniform and merrily sporting a t-shirt proclaiming one of his favorite activities. 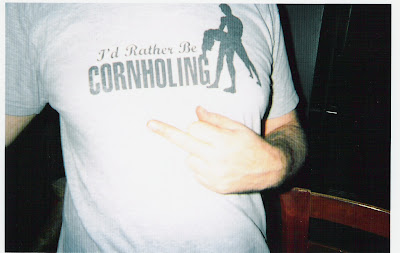 From my barbecue joint days, here's one from the Superbowl night when my boss and I learned exactly why you should put an apple in a pig's mouth while cooking it; the lips pull back, revealing a horrifying rictus that's exactly what I expect to see when I inevitably walk through the entrance to Hell. 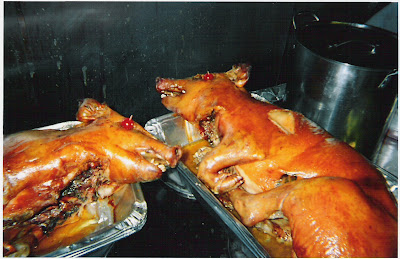 Here's a shot of Brooks, one of the characters who roam the streets of my neighborhood. He's an ancient alky who's almost never seen without a Budweiser in his hand or at his feet, and when not seen cheerfully walking around and waving hello to everybody while slurring "Alright!" to all within earshot, he's usually to be found sleeping in a chair in any one of three apartment building entrances on President Street or Fifth Avenue. I assume he lives in one of the buildings, but for the life of me I couldn't tell you which one. 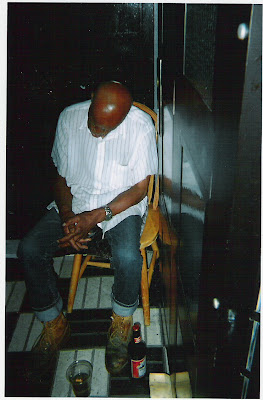 And what better way to end this little gallery than a seventeen-year-old shot of my friends JAG, Mr. Fun and Laura-Laura, having fun in a long-defunct Park Slope bar back in the days before its current state as a hive for yuppie families and trust fund kids?

I managed to piss off Scotty so badly one night: Upon running into him at some silly-ass highfalutin New York "artist" type thing in Manhattan, I looked at him and deadpanned, "So, you're The Tick?"

That picture of fun & laura is too adorable! Yet more proof that we were once young..ish!
Miss You!
XOXO Jen V.(G)

Who are those young'uns?
- Colie

I just watched the "Alvin and the Chipmunks" trailer on YouTube, and it seemed rather tame. Not all that funny but will probably win over the kids. At least it did not look as horrid as Underdog seemed to be.