IN HONOR OF THE DATE THAT WILL LIVE IN INFAMY 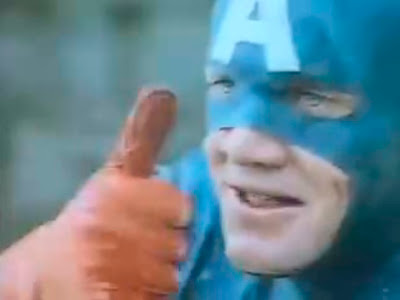 "America! Fuck yeah!!!"
Today's the sixty-sixth anniversary of when the Japanese bombed Pearl Harbor, and while we're pals nowadays I have to ask just what the fuck they were thinking by bombing the U. S. of fuckin' A? I mean, our history up to that time was not by any means a secret, so didn't they know that we're crazy? Didn't they know that bombing a nation founded on brutality and ass-kicking was not necessarily a good idea? And didn't they know that such an act would get the attention of Captain America, who would have to go overseas and kick ass simply on general principle?

So with that in mind, take out a few moments to remember Pearl Harbor and check out the most patriotic video ever made .
Posted by Bunche (pop culture ronin) at Friday, December 07, 2007

The part I'll never understand is why they didn't follow up with an invasion of Hawaii. The U.S. would not have been able to hold out, and would have lost a crucial naval base, and Japan would have been in position to begin operations against the west coast after consolidating the west pacific. They must have thought that a sharp slap was all that was required.

I always asked myself the same question, and the best answer I could come up with was that it was a case of warrior culture hubris. Maybe they thought we'd cower in the face of their samurai awesomeness, but think again, Tojo!

>warrior culture hubris. Maybe they thought we'd cower in the face of their samurai awesomeness

Do the words "shock and awe" ring a bell?

Thing is, America was in sad shape in 1941. Years of depression had sapped our government coffers and national spirit. Riots were commonplace in our streets. Periodicals as "respected" as The Readers Digest featured articles exorting us to stay out of "the distant war," and luminaries like Henry Ford and Charles Lindburgh even urged for an alliance with Hitler! Sure, bombing us seems stupid in retrospect, but we've been guilty of similar stupidity far more recently (again, see Iraq).

Also, as in the Iraq "adventure," there were many dissenting voices againt the Pearl Harbor attack in the Japanese high command... and again in a similar light, they were ignored.

As for why the Japanese didn't simply invade - they didn't have the resources to do so. Bombing a harbor is one thing; a land invasion of an inhabited island chain is quite another, especially when that island chain is almost a third of the earth's surface away from you. The necessary supply lines simply wouldn't reach far enough to do the job; even if they'd been able to ship across the necessary soliders and equipment, the Japanese would have been more or less stranded in hostile territory. (Can you say "American Revolution?") Pearl Harbor was a gamble - and for a while, at least, it was successful... enough so to earn a retribution no other nation (thus far) has suffered: nuclear bombing.

Who says this blog isn't educational?