IN THE WEE HOURS: SOME VERY TWISTED SISTERS & OTHER MUSICAL DIVERSIONS 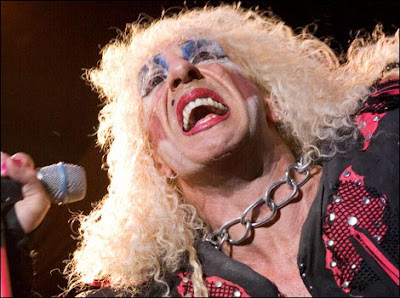 Dee Snider: not my idea of Mister Sandman.
As I write this it's nearly four in the morning. Why am I awake? Well, here's a new one: I was awakened twenty minutes ago by a group of very drunk females standing out side my building, merrily slurring the words to the loudest rendition of Twisted Sister's "We're Not Gonna Take It" I've ever endured. These chicks yowled that eighties chestnut for all they were worth, and even though I fucking hate that classic of faux metal I have to admit that the spirit was infectious. Somehow I just knew they weren't gonna take "it," whatever "it" was, and they made damned sure the world — or President Street, anyway — knew as well, repeating their bourbon-soaked statement no less than three times.

Needless to say, I am now fully awake.

Luckily there's a very good BBC documentary playing on PBS, POPULAR SONG: SOUNDTRACK TO THE CENTURY, to keep me company. The segment I came in on focused on the Tin Pan Alley/Brill Building songwriters and crazy-assed Phil Spector, so the music was generally excellent, scouring "We're Not Gonna Take It" from my sleep-deprived consciousness. The next episode just started and it's focusing on the thermonuclear impact felt when the Beatles hit, as well as that of the legion of blues-based white boys that followed in their wake (big focus on Eric Burdon and the Animals), and there's no way I can get back to sleep with that kind of stuff on the air.

When driving up to see the extended family on the holidays, my dad would play loads of tapes he had made. One of them featured Eric Burdon's cover of "To Love Somebody," which in his hands (and throat) has a soulful depth the Bee Gees never imagined. Fast forward a few years, to when I finally saw a picture of Eric Burdon. My reaction - then as now - was: "That skinny little white dude sang THAT? I could have sworn he was Black!"

I wish you came to see A Twisted Sister Christmas with me the other night. Sent you some pics of Dee in Santa garb and he came on stage throwing candy canes and condoms. It was priceless.