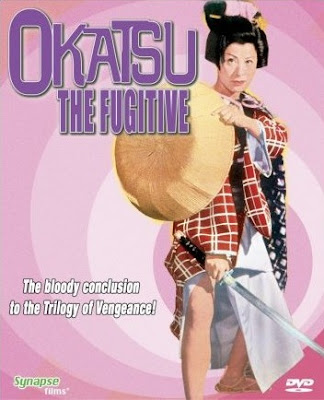 This third installment in the LEGENDS OF THE POISONOUS SEDUCTRESS series is a major disappointment after the excellence of its predecessor, QUICK-DRAW OKATSU . It's pretty much a remake of the previous film, even starring Junko Miyazono as a master swordswoman named Okatsu, but not the same character she played before (?); at the end of QUICK-DRAW OKATSU our heroine was a wanted fugitive, so wouldn't you expect a film entitled OKATSU THE FUGITIVE to be a direct sequel, especially since the film that came before it was a hit and the Japanese are not by any means sequel shy?

This new Okatsu is again the blade-proficient daughter of a swordsman, and when her father threatens to expose the vicious corruption of a local magistrate he's tortured in an attempt to get him to reveal the whereabouts of a written document of the magistrate's offenses. When he won't talk, his wife and daughter are hauled in by the bad guys and the wife is thrown to six hardened criminals for a bit of gang rape (which thankfully doesn't occur, but she does get alarmingly manhandled), and after that moment of extreme bad taste dad kills his wife and then himself. Unfortunately Okatsu then falls victim to the evil magistrate and is raped, then thrown into a basement dungeon. With the aid of her sleazy fiancee, she escapes — killing several swordsmen in the process — with the document hidden in her mother's elaborate (and very pointy) hairpin and sets out to avenge her parents, not realizing her fiancee is in league with the bad guys. After that the film becomes a lackluster and very much by the numbers samurai revenge flick that could have been written with little or no effort by anyone who's ever seen one of these things, and ends up a staggeringly generic item that will be forgotten about five minutes after the title that reads "The End." That's a real shame because the level of quality found in QUICK-DRAW OKATSU lead me to expect a hell of a lot more from all involved, and after this I can see why the series stalled out. TRUST YER BUNCHE!!!
Posted by Bunche (pop culture ronin) at Monday, December 03, 2007