NAUGHTY SITCOM LINE OF THE WEEK 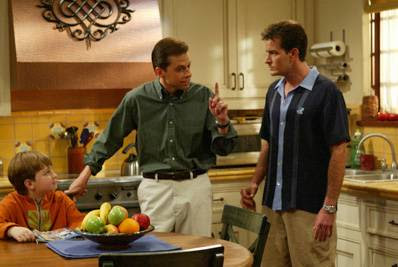 Until it went into syndication on NYC's Channel 11 a few months ago I never gave the CBS sitcom TWO AND A HALF MEN a chance, thanks to my long-standing prejudice against that network for being a bastion of wholesome programming adored by old farts (how else to explain the longevity of JAG?). But two things made me reconsider the show:

1. The realization that maybe CBS was capable of thinking outside the box, as evidenced by the generally excellent EVERYBODY LOVES RAYMOND, another show that I didn't give a chance until it hit syndication.

2. TWO AND A HALF MEN is a favorite of my pal Amanda, and our senses of humor are nearly identical (juvenile, tasteless, dirty, and morbid) so if she liked it as much as she did...

I checked out the show when it debuted in syndication and found that I'm in full agreement with Amanda. TWO AND A HALF MEN reminds me of the sitcom the two of us would write, although admittedly fettered by the FCC. I was amazed that the character study of Charlie, a drunken, womanizing songwriter (appropriately played by real-life gash-hound Charlie Sheen), Alan, Charlie's semi-queeny divorcee brother (John Cryer playing to type), and Jake, the divorcee's overweight, lazy asshole of an adolescent dim bulb son contained a steady dose of very sleazy humor for a CBS offering, at times even eclipsing the excesses of some FOX shows, and it wasn't just sleaze for sake of prurience. The shit was flat-out funny.

Anyway, tonight's rerun included a bit of dialogue that made me do a double-take at the same time that it appealed to me for bringing up what may be a network sitcom's first joke about one of my favorite hobbies. After returning from a sushi dinner, Alan bitches about his dislike of the cuisine:

Alan: You know what I hate about sushi? It's all fleshy, and flappy, and it tastes unnatural on my tongue.
Charlie: Alan, I think I know why your marriage didn't work out.

Dude, do yourself a favor and netflix, or even faith-purchase Season One of How I Met Your Mother, another CBS show.

My entire household (and Scott) are retarded for this show.

And, we're pretty sure the bar they hang out in is based on McGee's.

It's aces all around.