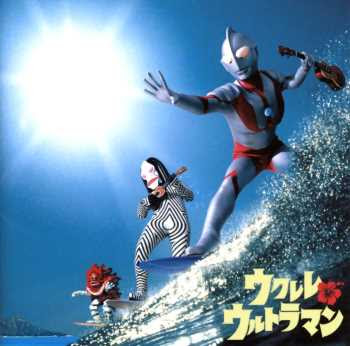 More lunacy from our pals in the Land of the Risng Sun! Yes, it's UKULELE ULTRAMAN , an album of Hawaiian-flavored takes on the music from the seminal Japanese superhero TV show, and the video of the theme tune is loopy as hell and simply downright charming in its blend of mellow and weird.

The video opens with a luau-themed parody of the TV show's title sequence, including the famous forced zoom in on our hero, only this time he's packing a ukulele! 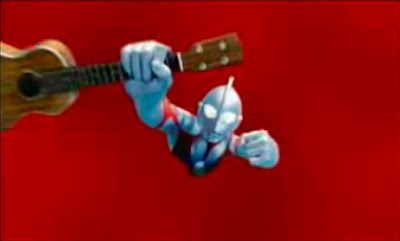 As the familiar theme tune is mutated into something you'd expect to hear at a Don Ho concert, Ultraman finds himself on some nameless alien world where he encounters Seabozu, the undead monster who escaped from the Ultra-Zone — you have seen that episode, right? — and a random Baltan (one of those awesome giggling lobster men with the oversized claws and stylish genie shoes), both of whom are visibly depressed. Exhibiting an uncharacteristic sense of compassion rather than just blowing the living shit out of them like usual, Ultraman comforts them and takes them with him to some Hawaiian beach where they engage in some mellow fun. 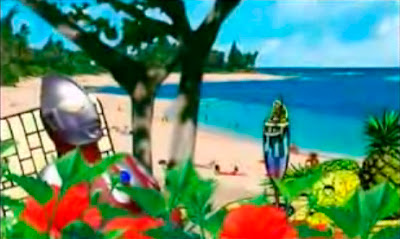 Refreshed by their seaside frolicking, the monsters hula and shimmy while Ultraman jams out, the whole thing conjuring up a feeling of "Was I just dosed?" relaxation and euphoria. 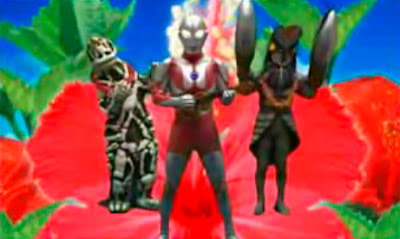 Going where the happy vibe takes them, Ultraman and his new friends catch some bitchin' waves before flying back to deep space. 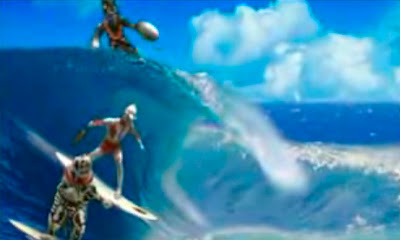 It's the perfect three-minute respite from the crushing tedium of the workplace and is the next best thing to smoking some tasty buds to take one temporarily out of the work environment and into a sweet, childlike wonderland where former mortal enemies can hang out, party, and just generally have a swell time. Man, do I wish I was baked when I first saw this!
Posted by Bunche (pop culture ronin) at Thursday, December 06, 2007

that is some cool stuff, and i would love to have this album.