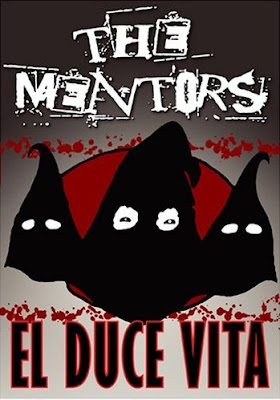 In this world that allows itself to be ass-fucked by the twin evils of political correctness and general society’s lack of a sense of humor, bands like the Mentors stick out like a sore thumb thanks to their totally intentional campaign of utter crassness and vulgarity, attempting to get away with their puerile offenses by identifying themselves as a comedy act. A trio of west coast louts who amateurishly rocked out in matching executioner’s hoods, the Mentors gained infamy in the late-1970’s and early-1980’s for their then-unimaginably-filthy catalog of such scatologically-minded and misogynistic non-hits as “Sleep Bandits” (an ode to gang-banging a drugged and unconscious woman at a party), “4F Club” (the “4F” standing for “Find her, fell her, fuck her, forget her”), “Herpes Two” (self-explanatory), “On The Rag” (also self-explanatory), and a host of other distasteful ditties, instantly endearing themselves to those who appreciate juvenile and offensive material (such as your humble reviewer) while simultaneously alienating virtually every woman on the planet and providing censorship groups with the easiest of targets. 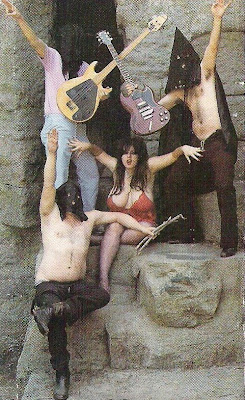 The Mentors (and friend).
Comprised of guitarist Sickie Wifebeater (Eric Carlson), bassist Dr. Heathen Scum (Steve Broy), and drummer/”vocalist”/de facto leader and spokesman El Duce (Eldon Hoke), the Mentors found themselves thrust (so to speak) into the spotlight when one of the aforementioned censorship gestapos, namely the nascent Parents Music Resource Center — better known as the PMRC — inadvertently provided them with nationwide advertising for their album YOU AXED FOR IT (Death Records, 1985) when the reverend Jeff Ling read aloud the lyrics to their classic “Golden Showers” as part of a slideshow intended to horrify the subcommittee with offensive album cover images and lyrics that were allegedly harming the youth of the nation (a group that for the most part was too busy getting wasted and fucking to even notice it was being corrupted by LP’s). While admittedly shocking, the slideshow had exactly the opposite effect than that for which it was intended, spurring thousands of amused viewers to go out and buy the offending album, thereby alerting the world to the existence of a band that was previously strictly an underground act that almost no one had heard of and generating an upswing in their record sales that continues over two decades later, delighting a worldwide fan base of reprobates. Let’s face it, the material sure as hell isn’t airplay-friendly, so the PMRC were a godsend for the hooded heavy metal hooligans, and that, my friends, is fucking hilarious.

Anyway, the Mentors only thrived after that unintended promotional shot in the arm and upped the ante on each subsequent recording, that is until El Duce’s raging alcoholism got him kicked out of the band and his subsequent demise under the wheels of a freight train. But the Mentors soldiered on nonetheless, with Dr. Heathen Scum stepping up to the mic as singer and Moosedick (Clark Johnson) on the skins, providing a much-needed blast of bad taste to a nation that enshrines the likes of Hannah Montana and Wayne Brady.

Which brings me to EL DUCE VITA — a title that I’m willing to bet causes Federico Fellini to break dance in his grave — a DVD that captures the whole Mentors ethos and serves as pretty much all the layman will ever need to know about the group. The mediocre-though-enthusiastic playing is very much in evidence, as is the finger-down-the-throat sleaziness one would expect from the merry molestors, most flagrantly on display in the bilious and amateurishly-lensed video for “On the Rag,” in which El Duce takes the viewer on a tour de force through his gripes about his girlfriend’s, er, monthly female concerns, all accented with gross-out visuals and nudity of the most questionable sort that would instantaneously garner the disc an X-rating if it were to be evaluated by the MPAA, especially the closeup shot of the actress' gore-smeared inner thighs and snatch, from which a tampon partially protrudes.

The videos overall are strictly bargain basement affairs shot by “directors” who have less business behind a camera than Helen Keller; it’s strictly point-and-shoot, coupled with the fact that the sources from which the material was transferred have fallen victim to the damage common to VHS tapes that have been viewed many times over the years, namely faded/washed out colors, and visible wear and tear. That said, the videos do possess a certain charm akin to the lysergic crap you might find on public access after coming home from a night of Jose Cuervo jello shots, each short loaded with sleazy groupies, titties, flailing rubber dildoes, massive substance abuse and lyrics that could easily have been written by a humorous sex offender.

The more recent live footage is nothing to write home about, essentially being the Mentors doing their usual no-frills thing in a couple of dive bars for a gaggle of beer-soaked troglodytes. Even die-hard Mentors fans will find this stuff dull since there the camera pretty much remains static, filling the screen with what looks like a Muppet Klan rally crossed with a high school talent show. And as for the extras usually found on DVD’s, forget it. With EL DUCE VITA you get bubkes.

Bottom line: while the actual videos are not without their own demented charm and snicker-value, this DVD is simply not worth your hard-earned scratch and I say that as a Mentors fan of over two decades. Curiosity value or not, caveat emptor. And if you absolutely must see this for yourself please keep in mind that my description of the content as X-rated was not hyperbole, so tread very carefully when thinking of playing it in underage or mixed company unless you want a boot up your ass or possible criminal charges for distributing harmful material to minors.

On a somewhat related topic, i much enjoyed my birthday mix cd! thanks again!
--E!

For the curious, The Mentors' albums can be found on itunes.com.

Judging form your description, I bet they took some footage from "The Mentors Fuck Movie" which I saw sometime in the early '90's...

And El Duce's narration was boozy and brilliant as ever. Truly the world lost a genius when he passed out on those train tracks. I seem to remember there were some conspiracy nuts saying that Courtney Love had him killed because he knew THE TRUTH behind Kurt Cobain's death and she had hired him to kill Kurt. It was all so fucking stupid.

I also think it was brilliant that the band took out a full page ad in the NY Times thanking the PMRC for the free publicity. What a great middle-finger response to a bunch of publicity-hungry assholes...