This past Saturday night I stopped in for a couple of rounds at the barbecue joint and found myself at the bar sitting next to one Caroline Brennan, a fun and hella cute regular who can spin an hilarious yarn without even trying. She also happens to live with Carly, my favorite naughty pixie, and when the two of them get together, look out!

Anyway as we sat and chatted while my man Marius ably tended bar, we noticed THE BOURNE SUPREMACY playing on the restaurant’s TV. We sat mesmerized by the violence for a few minutes and then Caroline turned to me with a bright-eyed expression on her face and said, “Wanna hear a great story about seeing THE BOURNE IDENTITY, you know, the first one, in Morocco?” I pondered that one for a few seconds, asking myself “What could possibly be so interesting about seeing any Hollywood flick in a foreign country? Same flick, different land, and that’s about it.” But, as you’re about to find out, Caroline had quite a story to tell, so I’ll let her take it from here: 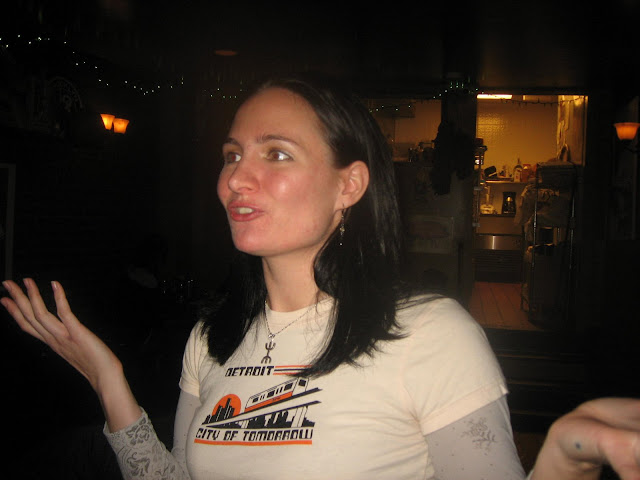 In the summer of 2006 I was living in Fez for two months, studying Arabic, and one day I was bored out of mind so I decided to go to the movies with my roommate, Erika. The movie theater we went to was built back in the French colonial days and hadn’t seen a lick of upkeep since then. I’m talking totally decrepit.

The marquee said THE BOURNE IDENTITY was playing, so we tried to get in but the aged staff wouldn’t let two unescorted females in, especially not two unescorted white females, so we had to go in led by some old lady who walked us to our seats in the dark theater. And although we got there on time for the movie, when we went in the film had been on for at least a half hour, so we had no clue what was going on. Plus, the fact that it was dubbed in French and subtitled in Arabic didn’t help much. Oh, and everything was covered in dust, so the old lady took out a cloth and wiped off the seats with a cloth, for which I gave her a tip worth roughly twenty cents.

As we sat and tried to watch the movie, we realized the audience was full of teenagers who’d come in to use the place for making out, so whatever happened to be playing on the screen was irrelevant. Adding to this was an old man, a vendor with a snack cart, walking up and down the aisle with a cowbell, all the while trying to sell stuff.

This went of for four hours. I swear to God, FOUR HOURS, and when it finally ended everyone got up and left, the staff of the place not even bothering to turn on the lights. As Erika and I left through the lobby, we saw the staff had hung around to see how the two foreign chicks had held up.

If you ever got to Morocco, I can tell you where the theater is!
Posted by Bunche (pop culture ronin) at Wednesday, December 05, 2007