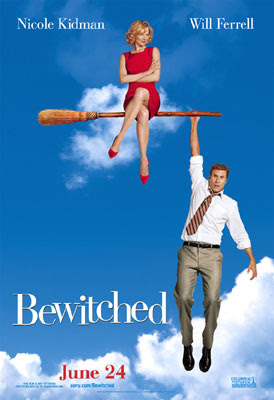 Well, I finally did it. Against all my better judgement I watched BEWITCHED on TV — no, I would never have paid to see it in the theater or rent it — and I don't quite know what to say. I've seen plenty of bad movies, many far, far worse than this one, but I can't recall ever seeing one where I swore I could hear wind whistling in one of my ears and out the other. No bullshit, my brain just up and said, "Fuck this shit, I'm outta here," and left my body to fend for itself.

Based (sort of) on the classic TV sitcom, BEWITCHED is one of the legion of flicks that sought to make a buck off of the audience's familiarity with its small-screen source, and is yet another of that odious lot to utterly fail as entertainment. The one novel twist to be had here is that instead of doing a straight remake of the show — which, by the way, is my favorite American sitcom for a number of reasons — the filmmakers chose to make it a story about a witch who gets cast as Samantha in a new relaunch of the series, paired opposite a total jerk of an actor whose career is sliding down the toilet, and the resulting romance between them (and now that I think about it, that twist really isn't all that novel). Anyway, the flick just sort of coasts along from one scene to another, offers absolutely zero laughs, and the performances from everyone in the cast bring to mind a stage farce starring a repertory company of somnambulists. I've never liked Nicole Kidman and her ice princess vibe, Will Farrell is only as good as the material he's given (he has nothing to work with here and it shows), Shirley McClaine pretty much phoned in her part, and even my man Michael Caine was a listless dud. The one ray of light is a brief bit from Steve Carrell where he channels the late, great Paul Lynde's Uncle Arthur character, but that's even a cheat since he's only a figment of Will Farrell's imagination. And once the film finally comes to an end it feels unfinished, and if I'm not mistaken one of the plot threads goes completely unresolved. But that's a minor quibble because by the time the movie reaches its final reel you will have long since lost anything even resembling interest. BEWITCHED doesn't involve its viewers, it's just there on the screen acting as cinematic wallpaper.

If you want to see a comedy about witchcraft done right you can't go wrong with either I MARRIED A WITCH (1942) or BELL BOOK AND CANDLE (1958), both of which were definitely huge influences on the original BEWITCHED as well as having a few things the "remake" doesn't, such as a story, actual characters, and genuine entertainment. Plus, the witches in both of those flicks are smokin' hot and don't look like replicants.
Posted by Bunche (pop culture ronin) at Sunday, December 16, 2007

I give them credit for trying something other than just a soulless Hollywood recreation of the original.

Unfortunately, as you said, it blew chunks. Shame, really. When I read what it was about, I thought there was some potential there to not entirely suck.