A REMINDER OF JUST HOW GOOD I'VE GOT IT

I swung by the barbecue joint on Saturday night so I could say "hey" to my former co-workers and wish them all a happy holiday, as well as visit with Tracey the waitress goddess and be brought up to date on the place's goings-on...that and I wanted to get my drink on before having to endure two-and-a-half potentially dysfunctional days in Westport.

During the course of the evening there was a point when Tracey's wolf-like alertness focused upon someone who strolled by the front door and she ran outside to corral him indoors. The person turned out to be a guy named Francis, a fifty-something poet that Tracey knew from the neighborhood. When he first sat down and began to make conversation he came off like a bit of a religious nut, going on at length about his Catholic school upbringing and pulling well-learned quotes out of the Bible that he applied to just about anything that anyone else said, all while wearing a very visible and very large crucifix. Long used to the loons who hang out at the barbecue joint's bar, Scott (the Texan former-bartender who's been frequently mentioned in posts about the place) and I exchanged glances that silently communicated, "Oh, fuck, here's another one," but as Francis became more comfortable he proved to be quite an interesting and fun guy. But there was something about him that I just couldn't put my finger on, something that just screamed "other."

As the evening passed Francis and I bonded over music, pop culture, and all the other shit you've come to expect if you read this blog regularly, having a grand old time, and after a while Tracey bought him a brisket sandwich and a beer. Following suit I bought him another round, and that was when Francis began to loosen up and let flow with the details of his life. 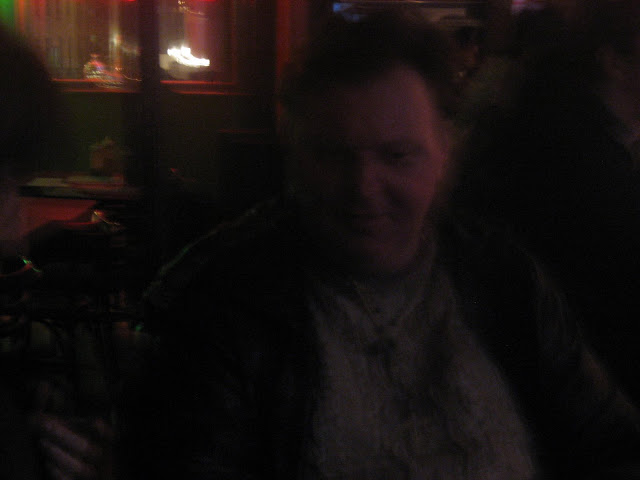 Francis was once a husband and a father but he apparently bottomed out on booze and is now homeless, residing in warmer seasons in Prospect Park and becoming a well-known and beloved neighborhood "character." He carries his few earthly possessions in a canvas shopping bag, panhandles for money on the street and the subway, and fills scraps of paper with his poetry. What money he manages to scrounge up he sends to his wife (the self-admitted love of his life) and kids, and any cash that remains is spent on whatever is needed to keep him alive. Francis recently attempted sobriety, but fell slightly off the wagon and was now living on the subway to stay warm. He even mentioned how he wished he were down in New Orleans, which prompted Joy the bartender to interject, "New Orleans? I went to Tulane!" Francis smiled and commented "I used to sleep on the roof at Tulane." Not missing a beat and with utmost seriousness Joy replied, "So did I!"

Tracey and I laughed our asses off at that one, knowing Joy as we do.

I greatly enjoyed the time I spent with Francis, but all too soon the hour grew very late and I had to be together enough the next day to handle going home to Connecticut. Moved by Francis' situation, I left the barbecue joint, hit one of the bodegas on Fifth Avenue and bought him two notebooks and a couple of pens, anything to let his thoughts and poetry be recorded on something other than scraps that could blow away if he dropped one of his piles of scribblings. I wished him luck and told him I'd like to hang out again. But who knows when that'll happen again?

When I got home I could barely sleep, slumber giving way to contemplation of such a personable and brilliant mind going to waste thanks to drink and homelessness. Just makes one think.
Posted by Bunche (pop culture ronin) at Tuesday, December 25, 2007