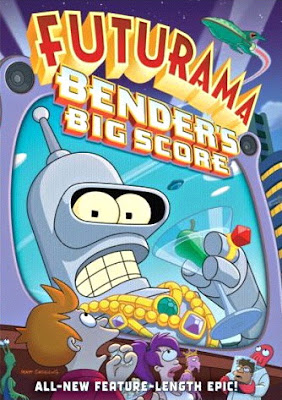 When cult favorite FUTURAMA was cancelled by the Fox network two years ago, there were rumors that the animated sci-fi sitcom might someday return as a series of direct-to-DVD features. Well, kiddiewinkies, that day is here and the results are quite encouraging,

The whole Planet Express crew is back and just as crazy as ever, this time weathering the unusual takeover of the Earth by a trio of nude aliens who scam the world into total economic depression. And as if that weren't bad enough, it's revealed that Fry has a previously unknown tatoo of reprobate robot Bender on his right ass cheek — a discovery made during a jaunt to the nude beach planet — 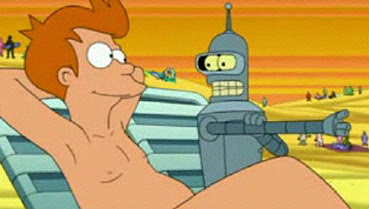 containing a code that allows one to travel backwards through time when it's said aloud. The aliens brainwash Bender into doing their bidding and send him back in time to steal everything of value from the past, a task for which Bender is perfectly suited since he's a robot and won't age and die while waiting for the year 3007 to roll around again. There's also an emotional subplot involving one-eyed, purple-haired hottie Leela meeting the man of her dreams, a situation that in no way sits well with Fry's feelings of unrequited love.

That's about all I can say without giving the whole thing away because the whole story relies on time travel and the complicated thread of events that old sci-fi McGuffin can weave, but unlike the majority of sci-fi stories involving any sort of time-jumping, this one is handled with very tight logic, plotting, and humor that works extremely well. In fact, I recommend that you watch it a second time, with the commentary track running, so you can catch all of the clues and gags that were set up throughout and were intended to be simply glossed over when seen during a first viewing.

It's great to have FUTURAMA back, and this is only the first of an announced quartet of new features — this one's supposedly getting split into four parts for broadcast on Comedy Central — so let's hope they keep them coming at a rapid pace and maintain the high level of quality found here. FUTURAMA was always a fun feast of comedy and spectacular visuals, and this feature actually feels like a movie and not just a glorified episode, something that can't really be said about THE SIMPSONS MOVIE (although, to be fair THE SIMPSONS movie suffered from having been on the air for nearly twenty years and during that time it had covered just about every plot possible for the human mind to conceive). So if you ever enjoyed the whacked-out adventures of the Planet Express crew, sign on now for a solidly entertaining return trip to the future. TRUST YER BUNCHE! 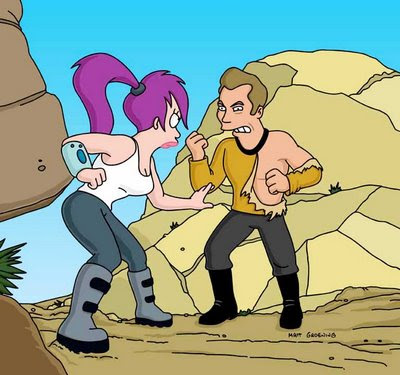 Ah, the lovely Leela, woman enough to take on Captain Kirk in single combat. With moments like this, how the fuck could Fox have canceled FUTURAMA?
Posted by Bunche (pop culture ronin) at Sunday, December 02, 2007