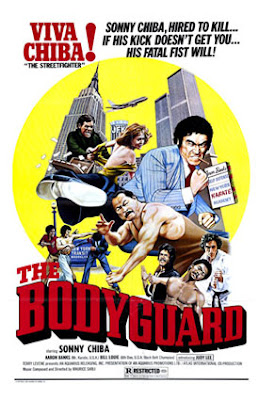 After years of being available in a crappy pan-and-scan print, the Americanized version of 1973's Sonny Chiba opus KARATE KIBA is available in a nice widescreen edition, proving once and for all that a gilded turd is still a turd.

This grindhouse mainstay opens with the following narrated text crawl:

"The path of the righteous man and defender is beset on all sides by the inequities of the selfish and the tyranny of evil men. Blessed is he who in the name of charity and goodwill shepherds the weak through the valley of darkness, for he is truly his brother's keeper, and the father of lost children.

Sound familiar? It should if you've seen PULP FICTION, since Quentin Tarantino, a notorious Sonny Chiba groupie, lifted it (Surprise!) for duty as Sam Jackson's thoroughly badassed signature line in that film.

Anyway, THE BODYGUARD is a dull waste of time that has pretty much the least amount of martial arts I've ever seen in a film allegedly of the martial arts genre. As a matter of fact, the flick's more of a routine crime flick that features Chiba — whose character's name, "Kiba," is redubbed "Chiba" so we're supposed to think the movie's a document of Sonny's day-to-day adventures — as an international crimefighter/bodyguard/badass-for-hire who announces on live TV that he's out to take down the mob and other such drug-dealing punks after he singlehandedly thwarts an airplane hijacking by Mafia goons which is odd since every single supposed Mafioso in evidence is played by a Japanese guy). In no time Chiba finds himself bodyguarding a mysterious woman (Judy Lee) who gives him not one shred of information as to who she is or why she needs protection from the armed killers who dog her every step, and the resulting plot is so turgid that even us die-hard Sonny Chiba fans just will not care. The characters jump from one scene of standing around and gabbing about deceptions and double-crosses to another, filling the screen with endless talking heads while the screen should rightfully be filled with images of Chiba beating the motherfucking piss out of all comers while gouging out their eyeballs and tearing off their nuts with his bare hands every three minutes. The camerawork is often amateurishly hand-held, the bane of seventies Japanese action flicks, and the whole thing comes off as less lively than any given episode of a routine cop show. By the time we find out that Chiba's client was the mistress of a slain Mafia capo and is doing her damnedest to get her hands on a cool million's-worth of heroin so she make a final big score, most audience members will have turned off the DVD or fallen asleep.

The one almost-decent action scene features Chiba on the other side of a closed door, a barrier he punches through to grab the arm of a guman; once the gunman's limb is secure in his grasp, Chiba gives the guy a nasty, bone-protruding compound fracture and then rips off said limb for later use as a throwing weapon. That sequence takes up maybe two minutes out of a total of nearly ninety, and from that bit of business to the next set-to it's a long, dry haul.

So basically THE BODYGUARD sucks ass. I've tried about five times over the years to sit through it in its entirety while sober, having made it all the way through once in the early nineties while drunk out of my mind after coming home from eight hours of hard drinking at Bar X (a favorite hangout of the Marvel Bullpen in those days), and I was only able to make it through last night because of the widescreen format allowing me to see shots and compostions that were cut off and thereby rendered incomprehensible by the pan-and-scan VHS version. Needless to say, I'd missed absolutely nothing.

The only thing keeping this sleep aid in my collection is a mind-boggling bit of nonsense tacked onto the early moments of the film by the American distributor: a hand-held camera's point-of-view wanders the then-sleazy streets of Manhattan's Times Square, eventually staggering up the stairs of a martial arts studio. In this dojo with walls papered with 42nd Street grindhouse karate movie posters stands Bill Louie, an apparently Hispanic martial artist in a stylish sweatsuit — he's a dead ringer for Freddie Prinze, the guy from TV's CHICO & THE MAN, not his son who starred in SCOOBY-DOUCHE and other like crap — who hands out ass-whuppings on what I presume are his students, all while doing his best impression of Bruce Lee's moves and cat-in-a-vise screeches. Observing this is Aaron Banks, a Semitic/Italian-looking dude in a karate gi, who notes upon Louie's completion of his fit of Bruce-ism, in a John Wayne/Brooklyn accent no less, "Thats pretty good. But here's how Sonny Chiba woulda done it." Banks then launches into full-on post-THE STREET FIGHTER Chiba histrionics, savagely assaulting a couple of students, one of whom he suspends off the mat by a good grip on the guy's clockweights, after which he puts his fist to the face of the other poor bastard with a jump-cut that makes it look like the dude's being hit by a flesh-and-bone sledge hammer. Composing himself, Banks stands up and Louie comments, "Yeah, but Bruce had more speed and science. He'd probably have done something like this..." Louie stoops and picks up a pair of matched nunchaku — or "chucks," if you prefer — then launches into a totally gratuitous display with them while shrieking like a madman, culminating in him catching the flails under his arms and uttering a triumphant and Flip Wilson-esque "WHOOOO!" Banks looks thoughtful and says, "Yeah...I can see your point." (I can't.) "By the way, where is Sonny Chiba?" He and Louie contemplate that question for a moment, chins in hands and practically saying, "Hmmm..." at which point the actual movie lurches to a start. I've seen this sequence many times, and, much moreso than the arm-removal, it's the only genuinely entertaining moment in the entire film. Avoid THE BODYGUARD like you'd avoid having one of those handheld apple-corers shoved up your anus. TRUST YER BUNCHE!!! 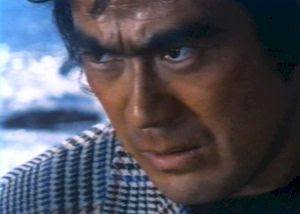 "I'm gonna kick my own ass for appearing in this piece of shit!!!"
Posted by Bunche (pop culture ronin) at Friday, December 14, 2007