ON THE SIDEWALKS OF NEW YORK: LAMENT FOR THE LAST DINOSAUR BARS 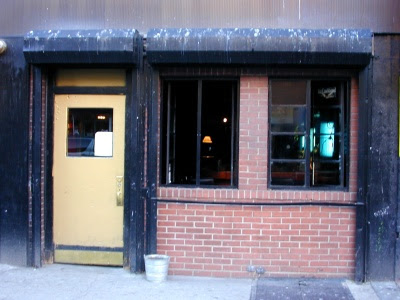 Mona's: soon to go the way of the dinosaurs.

One of the many things that used to be great about NYC back in the days was the squalid excellence of the East Village and its myriad bars and hangouts, most of which have been supplanted by coffee and wine bars or some other such yuppie foofery. During my entertainingly misspent youth I frequented many a verminous watering hole, most especially the late, lamented Downtown Beirut and King Tut's Wah-Wah Hut, but now the only dives I hit in that area are Library (perhaps the only bar kind enough to have a projection screen and allow me to run THE STREET FIGHTER on my birthday), Otto's Shrunken Head, and the occasional pop-in at the once great Ace Bar. Many others have loudly bemoaned Manhattan's cancerous decline into a gigantic, over-priced, soulless tourist trap, but I'll put it into terms us comics geeks can clearly understand: This ain't Metropolis, this is Gotham fuckin' City! It's supposed to have some edge to it, and the dive bars in the Village were among the last bastions of true NYC flavor.

My friend Xtina understands this state of affairs better than most, having grown up in lower Manhattan and witnessed her home's raw coolness erode over the past sixteen years or so, and this morning she sent me the following:

My dear friend Deena just sent me devastating news about the east village. Most of us know that the East Village ain't what it used to be. That hideous looking condo across the street from the cube on Astor Place sums it up. However, I did not lose faith. Losing Coney Island High was a big blow. Then Kim's Video stores began to dwindle. But even when CBGBs closed its doors, I did not lose faith. When my favorite diner, Polonia, on first Avenue and 7th began to raise its prices after undergoing a fancy rennovation, I did not lose faith. Starbucks, Subway restaurants and smoothie stores are now everywhere. Vinyl stores and vintage clothing stores turned into nail salons and cafes. Tower Records and video are long gone. Sounds Records turned into a tattoo parlour. St. Mark's Place is unrecognizable. I won't even get into rent prices. Yet, through it all, I always felt the East Village was still the coolest place for New Yorkers. My dive bar Mona's, where I have a million fond memories, may have tossed that awesome jukebox with the 45 singles, but it still had great music, a cheap pool table, and that cute bartender who always served me free beers who shall remain nameless. ALL of you know how special that black hole is to me. We have had a lot of wonderful times there and at Sophies. But, now, this HURTS more than all of the above. Read it and weep friends...and if this does not motivate us for a long and overdue gathering at our sacred ground, nothing will.

December 20, 2007 -- IT may be the final nail in the shared coffin of East Village dive bars. Two longstanding holes-in-the-wall, Sophie's on East Fifth Street and its sister spot, Mona's on Avenue B, are up for sale. "The neighborhood has changed so much," co-owner Bob Corton told Page Six. "I love both bars, but they're dinosaurs now." Corton plans to sell the low-lit saloons after the holidays. He has run Sophie's, which adopted its name from its original owner, the late Sophie Polny, since 1986. He opened Mona's in '89. Corton assured us he'll stay in the neighborhood but couldn't predict the future of his beloved drink tanks: "Once the places are sold, what happens to them is really out of my hands."
Posted by Bunche (pop culture ronin) at Friday, December 21, 2007

Sad... but the Lower East Side hasn't been cool or hip or edgy for a very long time. Early 90's at least...

What was the title of that song by King Missile...?

Alas, soon it will lose all meaning.