SOUND & FURY: THE CURSE OF "WE'RE NOT GONNA TAKE IT"

Having been savagely awakened at Jesus o'clock in the morning by a bunch of drunk chicks squalling Twisted Sister's 1984 mega-smash hit "We're Not Gonna Take It," I haven't been able to get the fucking thing out of my head, its relentless chorus echoing through my brain while I attempted to read my CINEMA SEWER book on the subway to work. 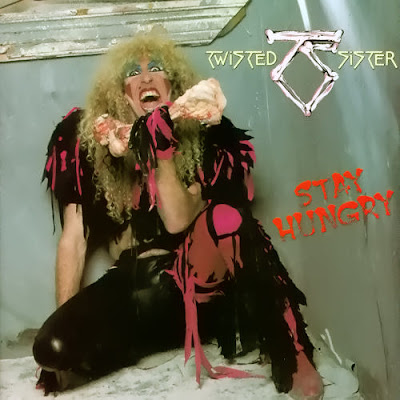 "We're Not Gonna Take It" stands out in my estimation as the epitome of pop/faux metal, featuring a repetitive/annoying hook, lyrics that are a tad vague as to who the singer is bitching about and exactly what the "it" he's not gonna take anymore is, all delivered by a guy who looks like a butt-ugly, post-apocalyptic drag queen.

Once seen as an anthem that railed against oppressive family values, when looked at today one realizes that interpretation largely hedges on one having seen the iconic and endlessly overplayed video, featuring Mark Metcalf — superb as ROTC uber-asshole Doug Neidermeyer in NATIONAL LAMPOON'S ANIMAL HOUSE — portraying an over-the-top cartoonish douchebag of a dad who loudly chastizes his son for any number of infractions, most notably objecting to his son's love of Twisted Sister, a band that at the time was barely known outside of their frequent gigs as a New York bar band (I still rmember the radio ads for them from when I was in high school that described them as "Twisted Sister! The band that will unfreeze your face!!!"). Once the kid expresses his desire to "rock," he strikes a chord on his cheesy guitar and blows daddy out the second story window, at which point the kid is magically transformed into lead singer Dee Snider (the aforementioned post-apocalyptic drag queen). The ensuing slapstick so offended certain protectors of public decency that the video became one of the first works to find itself on the hit list of what would eventually become the Parents Music Resource Center, better known as the PMRC (not nearly as catchy as SPECTRE, but that was already taken). If ya ask me, that's proof positive that those stuffy old senatorial wives didn't know what the fuck they were talking about. 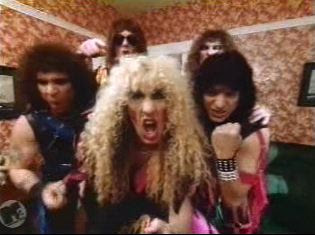 The mild public outcry against the song is really amazing, especially considering just how innocuous "We're Not Gonna Take It" actually is. It always struck me as what a twelve-year-old with delusions of "rebellion" would have penned; overblown, lacking much in terms of actual musical merit, and wholly appropriate for a cheesy Broadway musical show-stopper wherein the hero rouses the peasants to storm the castle. If it were me staging such a stirring scenario I'd have pretty much the whole cast put their all into it, exhorting the audience to sing along in a show of solidarity, only to have the characters mercilessly gunned down by heavily-armed military police, with an actor in Dee Snider gear and makeup being the first to get capped in the knees.

Snider has described the Twisted Sister musical aesthetic as attempting a fusion of Slade and the Sex Pistols, but if that was truly the intent the band utterly missed the mark, instead sounding like product designed to be gobbled up by adolescents (what a shock!). You can say what you want for the occasionally adolescent aspects of the Sex Pistols, but at least their vinyl rebellion sprang from something real, namely the shit conditions to be find in the UK during their time, but what did Twisted Sister have to gripe about? They were from Lawn Guyland, for fuck's sake! What's the worst they had to endure? Irritating accents and the ever-present threat of encroaching Negroes? Spare me.

And considering its ubiquity on both TV and the radio, I'm shocked that "We're Not Gonna Take It" peaked at a mere #21 on the Billboard Hot 100 chart. But that makes no nevermind since the song has now achieved iconic status as one of the "classics" of Eighties music, right up there with "Take On Me," "We Built This City (On Rock 'N' Roll)," and "Don't Worry, Be Happy," and it's often used in commercials, thus raking in untold residual greenbacks for Dee Snider.

Making matters even worse is the way pop culture tends to recycle itself every twenty years or so, and the teens and young adults today are now the new standard-bearers for some of the most obnoxious and artistically void music in the history of the pop medium, reviving the aural horrors of the MTV generation and ensuring that those songs pollute the minds of even younger listeners. Or the once-slumbering minds of curmudgeonly forty-somethings such as Yer Bunche.

I'd like to be able to say I'm not gonna take it anymore, but it looks like that fucking song is here to stay, so I'll just have to keep on taking it, and not in a good place. 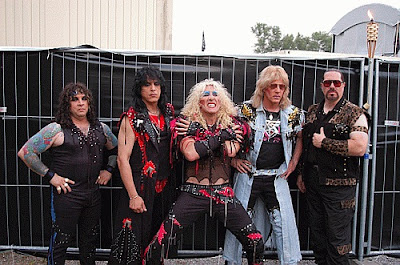 Labels: SOUND and FURY, THE CURSE OF...

I recall having an argument with one of my classmates around 1984 or '85 about the upcoming Twisted sister album (the one that wound of being the spectacularlly shitty come Out and Play). She insisted - loudly - that her minister had told his congregation that said album featured a severed goat head placed between a screaming nude woman's legs. That such a thing would even be said in public - much less believed by a more-or-less rational adult - at that time(*) is just one more indicator of how utterly full of shit the whole "religious right" gig truly is.


----------------
* - Hell, Cannibal Corpse had yet to release their first album if I'm not mistaken; Venom was an underground novelty act, and no major label would have ever comtemplated a record cover like the one she described, even if Twisted Sister HAD been the sorts to consider a cover like that... which they obviously weren't.

Aw, I have a soft spot for Twisted Sister. They were right up there in my early-80's suburban wuss metal pantheon. Maybe because I was a few years younger than you and considerably more clueless about hardcore and punk and whatever else.

I saw them play a 9/11 benefit, their first reunion show since the 80's, and they fucking killed. No makeup or costumes, they were just up there with their jeans and beer bellies, being what they actually are: a fucking muscular New York bar band. It's unfortunate for them that they had to get famous as a cartoon act.

The guys in Sister apparently no longer enjoy "suiting up", but they don't realize the nostaglic appeal is what is still filling the shows for them. Yes a kickass Hard Rock band without question and their older stuff which has been dug out for some of these shows is well worth the price of admission. I also saw that "NY Steel" show and hope some of the footage shot finally comes to light someday. It was that good.

They are also enjoying the annual holiday shows were they do Sisterized Christmas songs. Its honestly a blast and I have reviewed a number of these shows and photographed them on the website.

Believe me Lord Bunch, they are a worthy guilty pleasure considering what else is out there and still doing shows.