A FRIVOLOUS WASTE OF TIME: WHAT'S THE MOST MEMORABLE TV THEME TUNE? 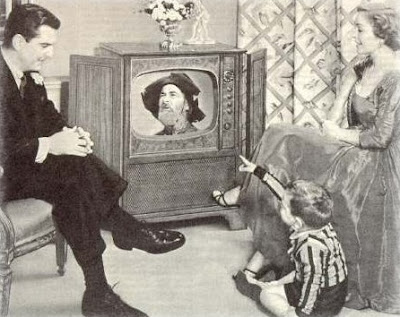 While sitting on the bowl last night and growing a tail, I once more pondered the deeper questions of existence. This time I veered away from solving the AIDS crisis and bringing the world's races and religions together in a lasting bond of peace and love, instead concentrating on something really importnat, namely trying to figure out exactly what would win the prize for most memorable TV theme tune of all time, with or without lyrics.

There are literally thousands to pick from and over five decades from which to dredge up those aural cues, so what to choose? I can't speak for the rest of you, but as a child of the rerun generation I have more TV theme tunes permanently burned into my cerebral cortex than I can remember, some long-forgotten that occasionally pop back to the forefront of my memory when jogged by totally unrelated stimuli (I once attended a funeral and found myself internally humming "I Married Joan"). Some have even passed into Americana, such as the theme from the 1960's Spider-Man cartoon, a show that has hardly aired for many years, last having been seen in Tri-State area syndication in the late-1970's; that song's longevtity in the face of encroaching obscurity may have to do with the Ramones having covered it on their final album, and the fact that the kids who watched the cartoon ages ago are now parents, and the kid-friendly nature of the song makes it easy to teach to the little ones (and it turned up during the end credits of the first Spidey flick).

DOCTOR WHO (the original BBC Radiophonic Workshop version from 1963)
"The Shake," better known as the theme to THE AVENGERS once Emma Peel entered the series (1964)
BATMAN (1966)
BARNEY MILLER
SUPER CHICKEN (featuring a great staccatto rhythm and some seriously silly lyrics)
CAPTAIN SCARLET AND THE MYSTERONS
JONNY QUEST (the original, not any of the later bullshit)
THE PERSUADERS
BONANZA
IT TAKES A THIEF
THE ODD COUPLE
MAUDE (hands-down the best lyrics ever for a 1970's sitcom)
THE DUKES OF HAZZARD (I think of my buddy Jared every time I hear this one)
THE BEVERLY HILLBILLIES (especially the dirty parody version)
LOST IN SPACE (the dynamic season 3 opening)
HOKUTO NO KEN, aka FIST OF THE NORTH STAR (the original "You Wa Shock" version and the subsequent "Silent Survivor," perhaps the first metal anime tunes)

As for my absolute choice for most memorable, I'd give it up for Lalo Schifrin's immortal "Mission: Impossible" theme. It's iconic, has that unique start/stop rhythm, and is, next to the deathless James Bond theme, probably the most recognizable spy tune of them all. It's been covered innumerable times, many of them terrific, most notably a version with lyrics by the Kane Triplets (United Artists, 1968) and a badass instrumental cover by the Meatmen, the same masters of bad taste who gave the world "Tooling For Anus" and the anti-Beatles anthem "One Down, Three To Go."

Anyway, that's my nominee. And your opinion?
Posted by Bunche (pop culture ronin) at Wednesday, December 19, 2007

Labels: A FRIVOLOUS WASTE OF TIME

I like "Branded" just because we used to sing as "Fisted" back in the bullpen...


Fisted, marked with a coward's pain,
What do you do when you're fisted?
You do it again!!
**Scream in agony/pleasure**

Mission Impossible is the most memorable. Closely followed by Hawaii Five-o.

DUDE! You forgot The Twilight Zone! ("Doo-doo-DO-doo, doo-doo-DO-doo..." appropriate, I guess, considering what you were "do"ing at the time.)

Buncheman... two IMPORTANT songs that should absolutely be included on this list (and we've discussed this, albeit drunkenly, before):

The Rockford Files - rocks on so many levels. The harmonica solo in the bridge is one of my favorites in music history.

The (original) Bob Newheart Theme - Bob strolls through mid-1970's Chicago to a totally cool, jazzy, changes every 2 seconds song that makes me long for the urban grit of our collective youths.