DAIKAIJU GIGAS: THE MOST ABSURD GIANT MONSTER EVER?

While at home for Christmas I once more entered the converted garage that long ago served as my room and perused the few remaining items that gave the place its feel as "The Vault of Buncheness-Northern Annex," such as a couple of old sci-fi toys, sundry VHS tapes, books that look and smell like the 1970's, and other random tchotchkes. It's all there for comfort, but by far my favorite item goes to the toy of Gigas, one of the more ludicrous-looking of the monster menagerie found on ULTRAMAN, the TV show most responsible for ruining me for life. 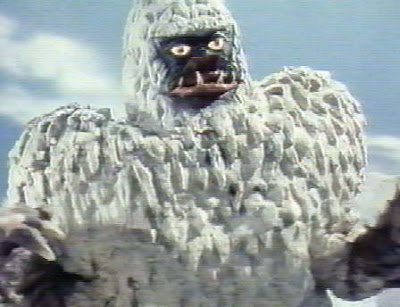 Gigas, the Abominable Snowman's short bus-riding cousin.
Gigas — surprisingly, not short for "Gigantic Ass" — is a completely outlandish man-in-suit (or "suitmation" if you prefer) critter from the Land of the Rising Sun that looks like what would have happened if the Abominable Snowman had fucked an ice cream cone, or maybe the result of a matter-teleportation accident involving the Son of Kong, Al Jolson in blackface, and the Bumble from RUDOLF THE RED-NOSED REINDEER. 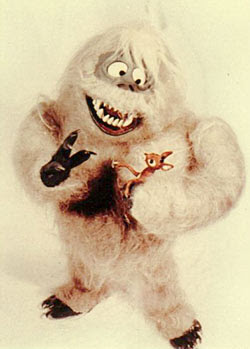 The Bumble: far more scary than Gigas.
Though I'd been an ULTRAMAN groupie my whole life I hadn't seen the show since my family left California back in 1972, then rediscovered it in 1986 by way of a Japanese-language twentieth anniversary tape obtained from a Japanese-run business that illegally copied homegrown VHS tapes for their countrymen living in Manhattan (this place is also where I first saw my beloved FIST OF THE NORTH STAR). From the looks of it I'd hazard a guess that the tape was of a theatrically-released "best of" from the series that included many memorable monster fights, but the unquestioned highlight of the tape was the fight between Redking — known to us stoners as "the Shrunken-Head Godzilla" — and Gigas. In some remote frozen clime, the two giants briefly clash before Gigas is frozen solid (?) by a Science Patrol bomb and his body explodes in icy chunks for no apparent reason. So not only does Gigas look balls-out stupid, he also expires in stunningly idiotic fashion. Bravo to Eiji Tsuburaya and his effects-maniacs for knocking yet another one out the park, and utterly delighting my inner six-year-old!

As the years passed and the original ULTRAMAN series finally made it to DVD, Gigas slowly made his (its?) was up the rungs of my affection and now stands as my favorite of all of Ultraman's foes; the Baltans, Ultraman's arch-enemies, come in at number two, but I don't find them as laughably goofy. A representative Baltan, one of a legion of intergalactic psychedelic lobster-men.

Knowing this, my pal Namegon hooked me up with one of those crazy Japanese toys that looks exactly like the monster as seen on TV; some of these toys go so overboard in detail that they even include representations of the zippers used to seal the sactors inside the suits, as evidenced in a replica of Ultraman himself that adorns one of my bookshelves and has shoes with clearly-depicted zippers. 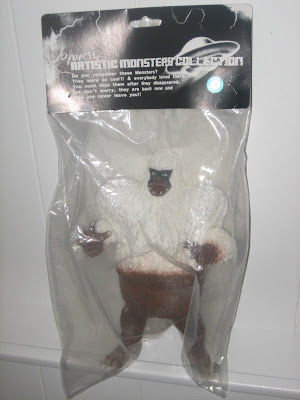 Gigas, Barbie's new boyfriend.
The toy given to me by Namegon was every inch what I expected from the obsessive Japanese manufacturer and is a treasure to the fan in every way, utterly capturing Gigas' DIY-on-Jaegermeister look and expression of "I just took a dump in my pants," but the icing on the cake is the text written on the packaging's cardboard section. I swear to God it actually says this, complete with grammar and punctuation errors:

Do you remember these monsters? They were so cool!! & everybody loved there. You must miss them after they disappeared. But don't worry, they are back now, and they are never leave you!!

Considering how many Japanese speak English, was it so hard to find somebdy to provide a decent translation? Whatever; that amazing bit of "Japlish" only adds to the excellence of one of my favorite monsters, a big lug who will apparently never leave me. (I can't say the same for some of the women in my life.)
Posted by Bunche (pop culture ronin) at Thursday, December 27, 2007

wow, a CCP gigas is a great gift! CCP
is known for vinyl toys that lavish loving detail on lesser known kaiju characters.